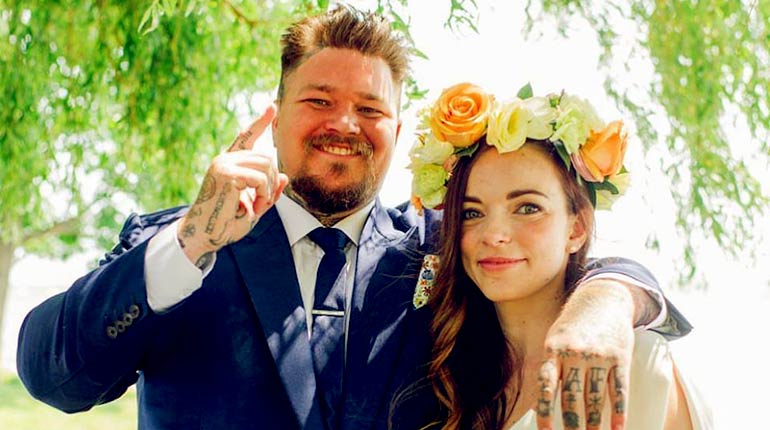 Matty Matheson is a Canadian Chef known for his work in the show, Dead Set on Live. The larger than life chef is far from your conventional cook. Sporting tattoos and a signature cap, he mostly wears backward. You’d honestly be forgiven for thinking that the man is hip hop musician.

However, looks can be deceiving. Matheson is all about his cooking. Most of his knowledge can be found in his published works, ‘HomeStyle Cookery.’ Bring your appetite as we explore the life and career of this chef. Continue reading to find more about his wife, Trish Spencer.

The famous Canadian Chef is laughing, we bet literally, all the way to the bank. Chef Matty is estimated to have a net worth of about $5 million. Matty Matheson got his wealth mainly from hosting television shows. He has hosted shows such as Dead Set on Life, and It’s Suppertime.

He set up an establishment known as the Groups of 7 Chefs. Matty then opened the now-closed, Parts & Labour restaurant alongside P&L Catering the very next year. 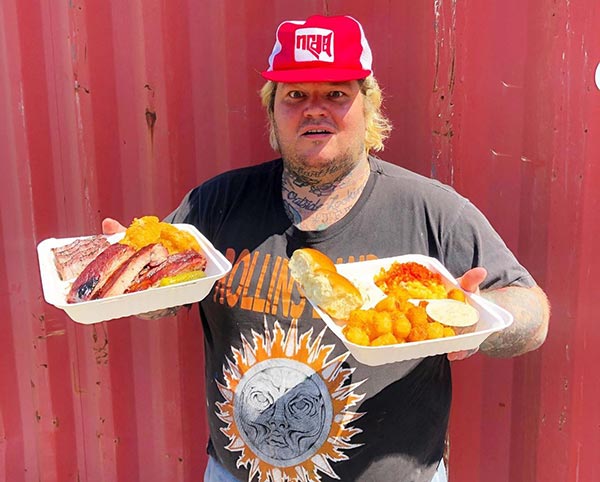 Other than working in restaurants, the former P&L Catering owner has worked on numerous television shows. They range from popular hits like Dead Set on Life to It is Suppertime. The latter aired on Viceland Television network.

He also appeared in Munchies. Matt has amassed many fans because of his humor, personality, and bubbliness. His personality alone is so good that even if you’re not into food, you can have a blast enjoying his humorous inappropriate adult jokes and sexual innuendos.

The guy doesn’t only know how to work with pans but also with puns, pun intended. The hilarious chef has also written a cookbook entitled: Matty Matheson: A Cookbook. It was released in October 2018. 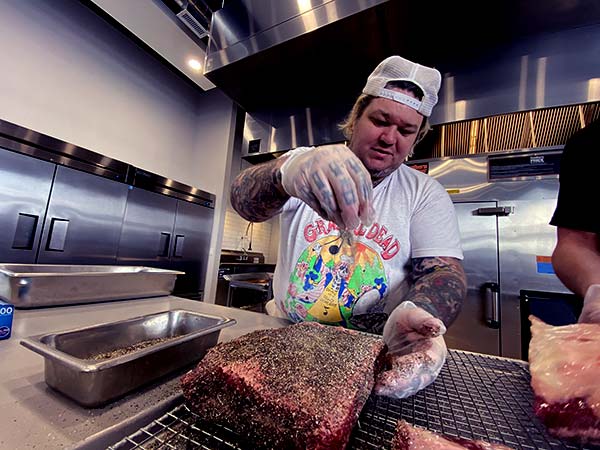 The Dead Set on Life host is married to Trish Matheson Spencer. She is an American lifestyle and fashion expert. Trish is also the proprietor of a bridal boutique in Toronto, Canada.

The two have been lovebirds since they were teenagers. They started dating after Trish’s sister encouraged her to go out with him.

She was very hesitant at first. Chef Matty Matheson and Trish Spencer have been happily married since August 2014. Their wedding ceremony was held in Port Dover Beach in Ontario, Canada.

Trish Spencer has seen her hubby through some of his hardest times. The chef also loves posting messages about his wife online. He even continually praises her for being the best cook he knows. 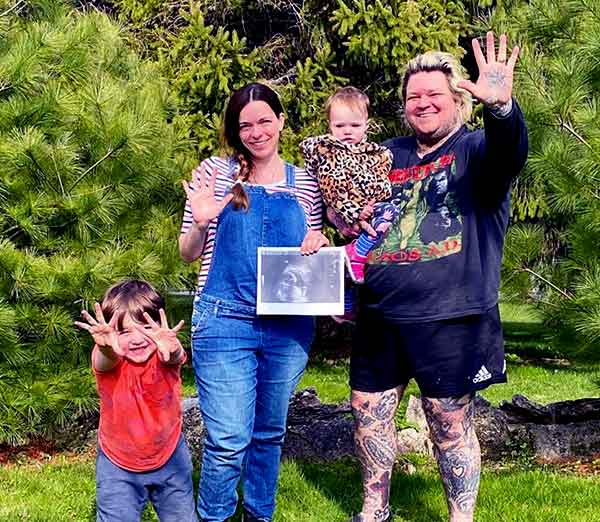 Caption: Matty Matheson with his wife Trish Matheson along with their two kids

That’s a big compliment coming from a professional chef, and we are sure her cooking must be excellent.

Trish Matheson Spencer is an American who is a lifestyle and fashion expert. She co-owns a bridal boutique in Toronto, Canada, named Loveland. Her boutique sells bridal wear, swimsuits, jumpsuits, shoes, and jewelry. The mom of two was born in New Brunswick, Canada.

She grew up in the same neighborhood. Her date of birth is, however unknown. The celebrity chef, Matty Matheson’s wife, was one of four siblings in her family. Surprisingly, her mom was also a chef. The mother of two loves to keep her life private and is not active on social media.

Matty and wife Trish has been blessed with two kids, a son, and a daughter. This is a daughter named Louis Matheson and a son, MacArthur Matheson, who was born in March 2016. Matty loves posting pictures of his kids on his social media pages. This famous chef is also a loving father, and we couldn’t be any happier.

Matty Matheson as a Chef.

After studies completing his studies, the chef started working at Le Select Bistro, which is a French restaurant. Afterward, he joined La Palette from 2006 to 2008. In 2011, after his stint in employment, he was bitten by the entrepreneur bug and decided to start his own business named the Groups of 7 Chefs. He then started the now closed, Parts & Labour restaurant alongside P&L Catering in 2012.

Matty Matheson has his own YouTube channel named, Matty Matheson. His channel has 592K subscribers. He uses his channel to showcase his cooking and various recipes. The bubbly chef also features in the Munchies channel, which has 3.79 million subscribers.

YouTube has given the chef access to another audience and various demographics to give cooking tips and lessons. With every video with millions of views, Chef Matty Matheson’s Net Worth also comes from youtube earning.

The renowned Canadian chef was born on February 7th, 1982. He is currently 38 years old. Matty is an Aquarius Zodiac.

The renowned chef has turned his body into a canvas of tattoos. From a bird to flowers, to snakes and a skull, his body is almost a living, breathing art gallery. The celebrity chef has a very distinctive look that is unlike other chefs, thanks to those hundreds of tattoos. He is his unique brand, undoubtedly. 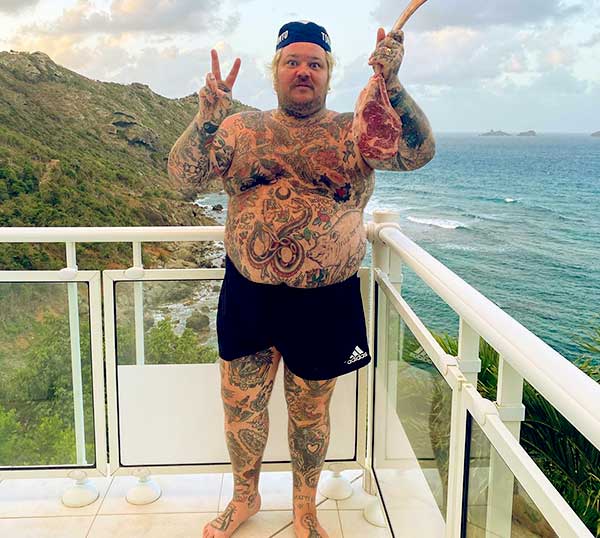 The celebrity chef is 5ft 6 inches in height. He weighs about 211 pounds or 96 kg. His weight is attributed to being a foodie. His chef career doesn’t help either when it comes to his weight, as he is almost always surrounded by food.

At 11 years of age, most kids are usually busy with kids’ stuff and just having the time of their lives in simple things like playing games, watching movies, and trying to finish their homework on time. For Matty, this was not quite the case.

The famous chef started doing cocaine at 11 years and got hooked into drug abuse. A brush with death helped him overcome his addiction when he got a heart attack at the age of 29. The chef is now drug and alcohol-free and living a healthier, happier life.

If you’re having a bad day, then take a break and visit Matty Matheson’s Instagram. His goofy and hilarious photos and videos will lift your spirits. He loves posting photos of his adorable kids, his wife, and his delicious dishes. His Instagram handle is @mattymatheson, and he has 845K followers.

Restaurants and its location.

Matty Matheson had a restaurant named Parts & Labour, which unfortunately was closed down in January of 2019. The restaurant was opened in 2010 and featured a bar also.

The restaurant was located in Toronto, Canada. The hilarious chef also has a pizza restaurant named Maker Pizza in Toronto. He co-owns the restaurant with a business partner. The pizzeria has two locations.

Matty Matheson has also revealed that he plans to open a new restaurant in Toronto that serves more fine dining meals. He hinted that the restaurant would be in the white building located at Queen and Shaw just near his former restaurant. New restaurant means increased net worth for him.

Matty was born to parents Stephen Matheson and Joan Matheson. His father was a reputable engineer back in the day, while his mother moonlit as a waitress. Matty’s home town is Saint John, New Brunswick, in Canada.

He was one amongst four children, growing up alongside a sister named Sarah and two brothers, Adam and Stephen. The Canadian Celebrity chef learned his cooking skills in Humber College, located in Toronto, Ontario.