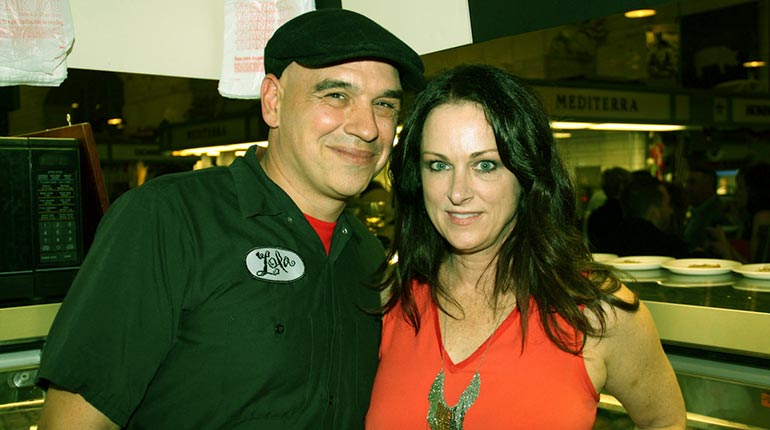 Michael Symon is a restaurant owner, reality television personality, writer, and culinary expert. He is the proprietor of establishments such as the B Spot. Shifting the focus to his literary exploits, we have discovered that he has written several books. These include titles like The Soul of a Chef.

As far as his endorsements are concerned, we learned that he was once the spokesperson for businesses like Vitamix. Let’s explore details about Chef Michael Symon’s net worth and wife, Liz Shanahan. Here are 15 facts you should read about.

Michael Symon owns a handful of restaurants. During the 2016 presidential election, Chef Symon showed that he was not afraid to speak his mind, and declared that Donald Trump was not welcomed in any of his restaurants.

This was Michael Symon’s first restaurant, and it dates back to 1997. The place is located at 2058 East 4th Street in Cleveland. Michael’s establishment prides itself in serving rustic food in a sleek, lively environment. All ingredients are sourced from local purveyors. 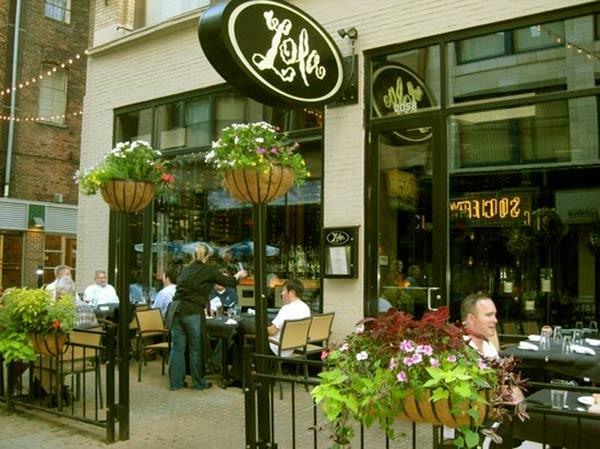 The B Spot Restaurant is an industrial-chic chain, which can be found all over Cleveland. Its original location is 28699 Chagrin Blvd, in Woodmere. The famous chain specializes in gourmet burgers and a variety of milkshakes. They offer a happy hour between 3 and 5 pm, where customers can buy a hamburger for only five dollars. 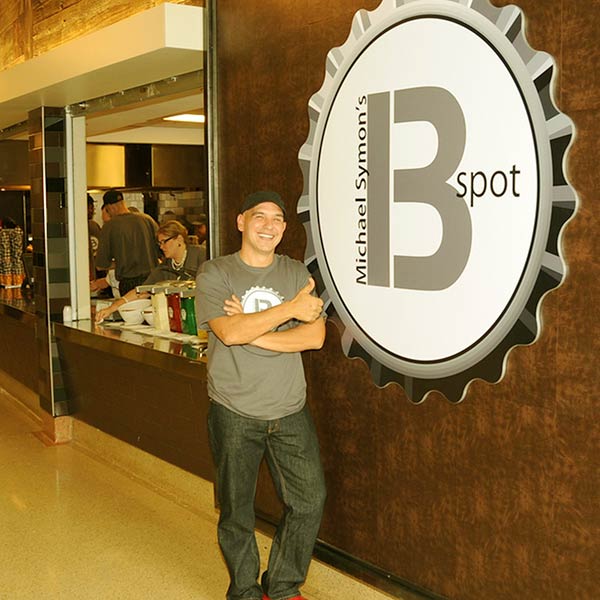 Caption: Michael Symon restaurant The B Spot located in Woodmere

The Restaurant was located at 900 Literary Rd, in Cleveland. Unfortunately, a fire in 2015 caused it to shut down. Michael Symon announced that he was going to open a new restaurant altogether, Sherla’s Chicken and Oysters. However, Chef Symon found himself busy with other exploits and sold the space to Dave Ferrante, who is the proprietor of Visible Voice books. The building hasn’t been reopened yet. 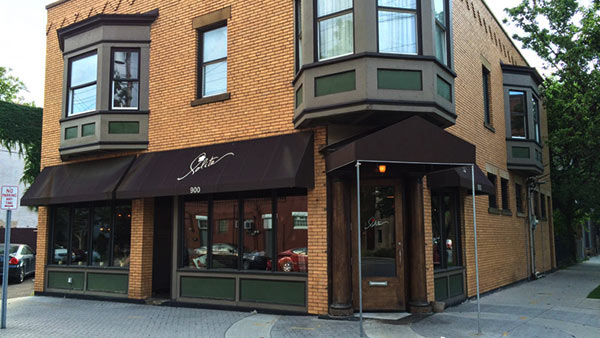 This restaurant was the first establishment that Chef Symon opened outside Cleveland. It is located at 1128 Washington Boulevard and was opened back in 2007. The place is designed like a wood-fired meat house, which enables it to focus on steak. It is ideal for intimate gatherings.

The Angeline Restaurant is named after Symon’s mother, who played a big part in his culinary career. To date, she still offers him guidance. The restaurant is located in Borgata Hotel Casino & Spa in Atlantic City. It specializes in foods like Angel’s Lasagne, which is also named after his mother. It remarkably consists of over 30 layers of meat and pasta!

Chef Symon has spent decades in the culinary industry, which has helped him amass a significant net worth. In addition to his work as a chef, Michael has also worked in television. His affiliation with the Food Network, for example, has seen him appear on shows like Melting Pot and The Next Iron Chef.

Michael receives a substantial income for his exploits on television. In regards to his writing career, we found that he still has several books available for sale online. Live to Cook, for example, is available for $35 on Amazon. In order to acquire a hardcover copy of The Soul of a Chef, you’ll also have to part with about $51. His books are highly-priced and in demand. As things stand, Michael Symon’s net worth sits at $6 million.

Chef Symon’s wife is a woman named Liz Shanahan. The couple first ran into each other at one of Symon’s restaurants. At the time, Liz was helping him manage the establishment. A working relationship gradually blossomed into a romantic dalliance. At the time they started dating, Liz had a two-year-old son from a previous relationship. After they tied the knot, Chef Symon officially adopted Liz’s son Kyle, and the family three settled down in Los Angeles. 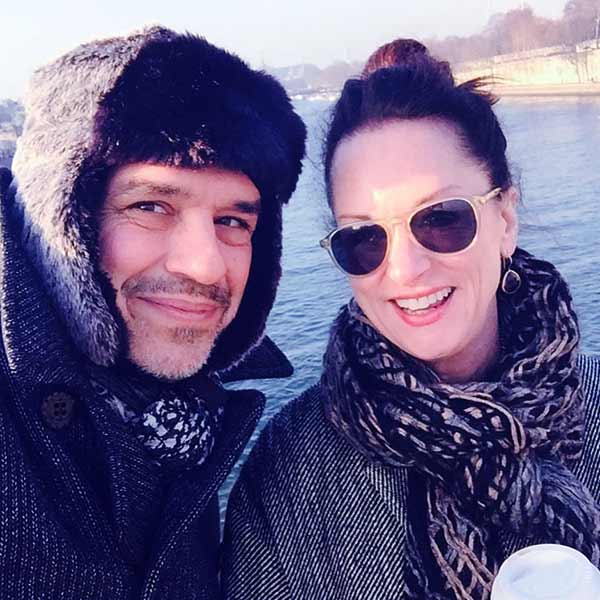 More than two decades on, and Michael and his wife are still together. They regularly share social media posts of each other at dinner parties and public events. On the 3rd of December 2018, Michael and his wife, Liz Shanahan, became grandparents after the birth of Emerson.

Liz Shanahan is a woman who has vast experience in the culinary world. She and her husband work together. This was no more so evident than when they opened Lola together. Other than a career in the restaurant industry, we also learned that Liz is an animal lover. Michael Symon and wife Liz has two dogs: Ruby and Ozzy. One is a bullmastiff whereas the other is an old English dog.

Michael Symon was born on the 19th of September 1969 in Cleveland, Ohio. At this moment, he is 50 years old. Being a Virgo, Michael is burdened with a wealth of creativity. It has enabled him to thrive in the highly competitive world of the culinary arts.

Chef Symon is a published author with several titles to his name. Some of his books include titles like Fix it with food, 5 in 5 for every season, Playing with Fire: BBQ and More from the Grill, The Chew-Summer Flavors, Carnivore, What’s for dinner, Fall Flavors and Live to Cook. 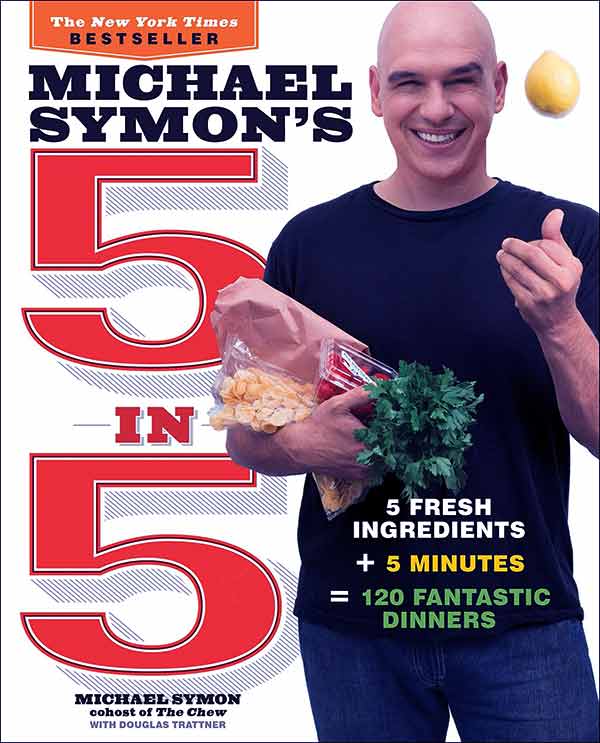 Caption: Michael Symon book named 5 in 5 for every season

Third, in the list of Chef Michael Symon’s recipe is drunken cabbage.

Read below to know Michael Symon’s recipe for Shrimp Scampi with Pasta.

Among 5, Michael Symon’s Recipe, “Tart Cherry and Red Wine Sundae,” is the last.

Chef Michael Symons Do not Have any Biological Kid.

Chef Symon only has one child, a step-son named Kyle Symon. He is the biological son of Liz Shanahan and her ex-partner. There is not a lot of information available on his biography, save for the fact that he is also a father. His daughter’s name is Emerson. 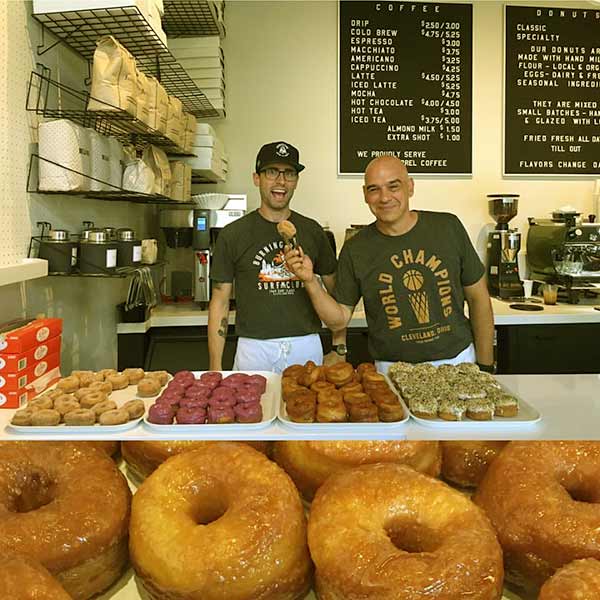 Michael Symon is a Tattoo Lover.

Michael Symon has so many tattoos that even his own wife, Liz Shanahan, cannot list all of them. She does not know how many he has! When questioned about his tattoos, Symon admits that he has probably spent the best part of 200 hours getting inked. 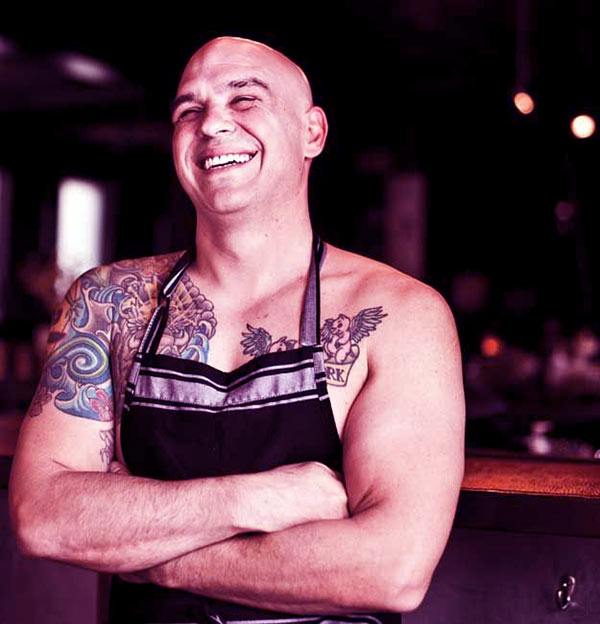 His first tattoo was of a cartoon devil, which he got when he was a teenager in high school. Since then, chef Michael symon has been adding to his collection regularly. His collection of tattoos includes a diagram of primal cuts, inspired by a cookbook from the 1800s. He also has an angelic ‘got pork’ pig tattoo on his left shoulder.

Chef Michael is the son of Angel and Dennis Symon. Interestingly enough, he has a multi-cultural background. These include Silician, Greek, and Eastern European ancestry. He grew up alongside a sister named Nikki Symon.

The Greek part of his ancestry comes from his father, Dennis. Back in the day, he used to work for the Ford Motor Company. His mother, on the other hand, is Sicilian regarding her origins. His passion for cooking comes directly from her. To date, she makes the best lasagna he has ever had. 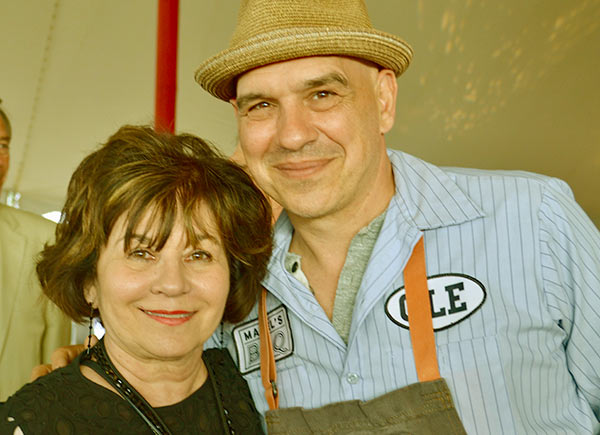 Chef Symon has enjoyed a long career on television. He has been a staple on the food network for decades now. This has seen him feature in television shows like Iron Chef America, Food Feuds, The Best Thing I Ever Ate, Cook Like an Iron Chef, and Food Feuds. 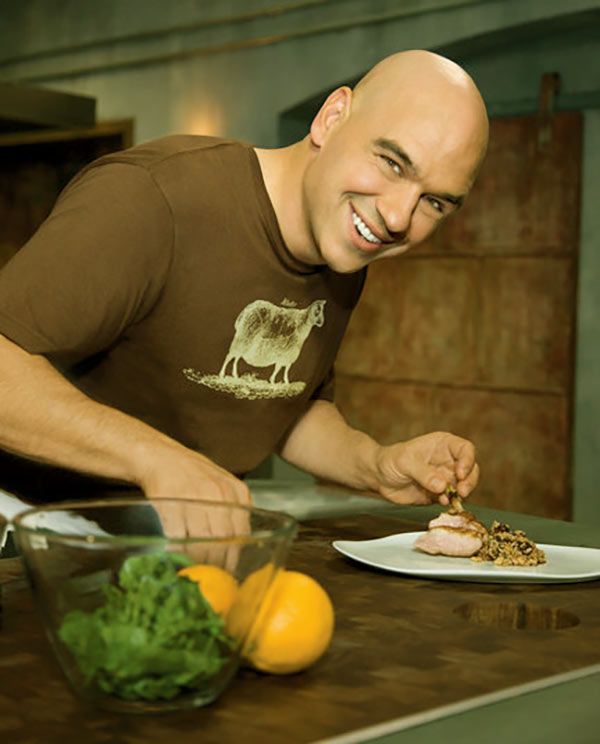 Chef Symon has amassed a remarkable following on Instagram. To date, he reportedly has 573K followers. Michael uses this platform to list recipes, cooking tips, as well as host Q & A with fans.

Just recently, he wowed fans with his recipe for the Charred Scallion Dip. There are several more recipes to be found on his page as well. Besides cooking, we also learned that Michael is a huge fan of wrestling.

He posted a picture of wrestling legend, Rick Flair, back in April. Additionally, we also learned that he is an animal lover. He posted a cute picture of his dog, Norman, a few weeks ago.