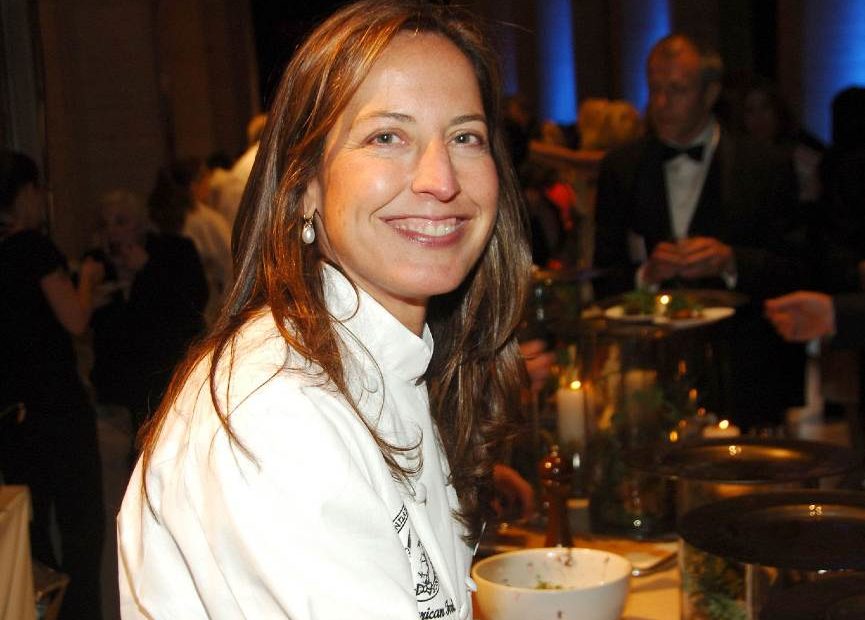 Debra Ponzek is an American chef, restaurateur, and author. She co-owns the Aux Délices restaurant chain with her husband, Greg Addonizio.

Debra Ponzek was born on August 26, 1961, in Morristown, New Jersey. While she had a passion for cooking very early on, Ponzek followed, in her opinion, a more realistic career path. Therefore, she pursued biomedical engineering at Boston University.

However, after two years at BU, her calling became too strong, and she promptly dropped out to pursue her true passion: cooking. In that vein, Ponzek joined New York’s prestigious Culinary Institute of America.

Debra Ponzek as A Chef. 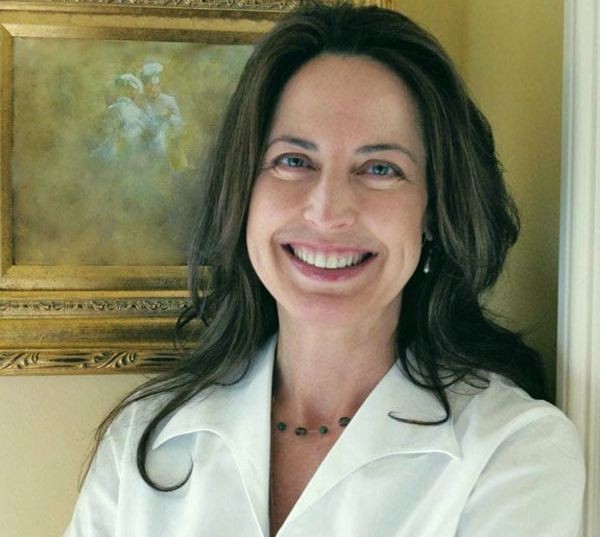 As part of the CIA’s externship program, Debra gained field experience at the Tarragon Tree restaurant in Chatham, New Jersey, and Toto Steakhouse in Summit, New Jersey. Ponzek subsequently earned her Bachelor of Arts degree in Culinary Arts in 1984.

During her externship at Toto Steakhouse, restaurateur Drew Nieporent of Myriad Restaurant Group spotted Debra. Drew was so taken by her talent that he offered her a spot as the sous chef at his flagship restaurant, Montrachet. She served as the second-in-command for many years before being promoted to executive chef.

In her seven years as head chef, Debra led Montrachet to newer heights. The restaurant received three stars from The New York Times. To top it all off, the restaurant went on to be awarded two Michelin stars. In the process, Debra won the 1992 Rising Star Chef award from the culinary guild, the James Beard Foundation.

The year 1994 was a year of rediscovery for Debra. After her first marriage ended a year prior, she resigned from her position at Montrachet and moved to Connecticut.

In December 1995, Debra established the first location of her gourmet restaurant, Aux Délices, in Greenwich, Connecticut, with her second husband. Currently, Aux Délices operates out of several locations in Connecticut, including a second outlet in Connecticut and Darien and Westport.

Debra Ponzek is an Author.

Furthermore, Debra has authored four widely acclaimed cookbooks. She published her first book, “French Food, American Accent: Debra Ponzek’s Spirited Cuisine,” in 1996. Subsequently, she published “The Summer House Cookbook,” in 2003. In 2006, her third book, “The Family Kitchen,” came out. Debra’s most recent book, “The Dinnertime Survival Cookbook” was published in 2013.

Debra has received several industry awards and distinctions throughout her career, including Chefs of America Association’s Chef of the Year 1990 and a nod on Food & Wine magazine’s list of Ten Best New Chefs. Additionally, Debra is the first American chef to receive the Moreau Award from the Frederick Wildman and Sons Company.

Debra Ponzek has been profiled in several publications, including The New York Times, Elle, Food & Wine, and The Oprah Magazine. She is also somewhat of a celebrity in Connecticut and has made appearances in local and regional magazines and newspapers.

In addition, Debra has appeared on talk/cooking shows on major network TV channels. Most notably, she has featured on Late Night with David Letterman and the Today show on NBC, the CBS Morning Show, and Sarah’s Secrets and Cooking Live on the Food Network.

Chef and restaurateur Bobby Flay was the first husband of Debra Ponzek. They wed in May 1991 after having met in June 1990. Bobby and Debra were the forerunners for the title of James Beard Foundation’s Rising Star Chef Award in 1992.

When Bobby got wind of his competitor, he chose to withdraw his name from the gauntlet. As noble as the gesture was, it was ultimately unnecessary as Debra won the award of her own merit. Bobby had his moment in the spotlight the following year when Debra presented him with the award.

Debra Ponzek is Married to her Husband Greg Addonizio. 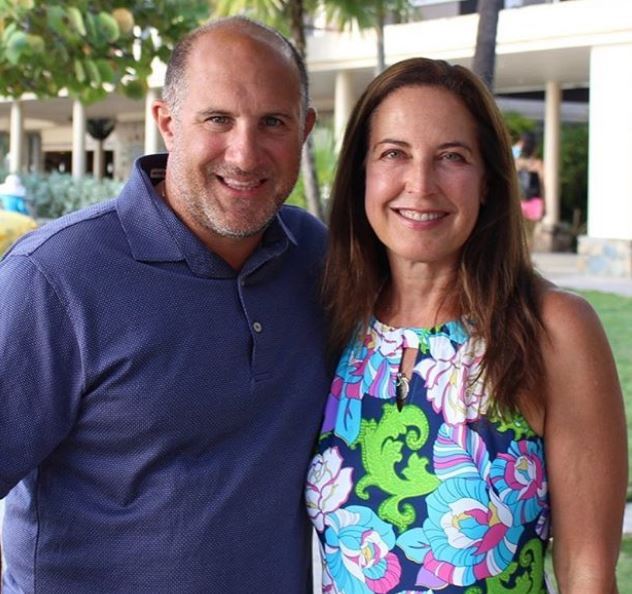 After her marriage to Bobby Flay ended, Debra moved to Connecticut, where she met fellow chef Greg Addonizio. They married soon thereafter.

Greg is not only her life partner but also her business partner. They jointly own and operate Aux Délices, a restaurant, and catering service. With her innate culinary skills, Debra spends most of her time in the kitchen as the head chef.

Greg, on the other hand, has previous experience in handling the business aspect of a restaurant. According to his LinkedIn profile, he was the chef-owner of Miramar Beach Inn in Half Moon Bay, California. Additionally, Debra Ponzek husband Greg Addonizio also previously owned and managed Clearwaters Restaurant in Monroe, Connecticut. In that vein, Greg handles the business aspect of Aux Délices.

When Debra and Greg opened the doors to the first location of Aux Délices in Greenwich, Debra was pregnant with their daughter, Remy Addonizio. Subsequently, Chef Debra and husband Greg Addonizio went on to have two more children: sons Cole Addonizio and Gray Addonizio. 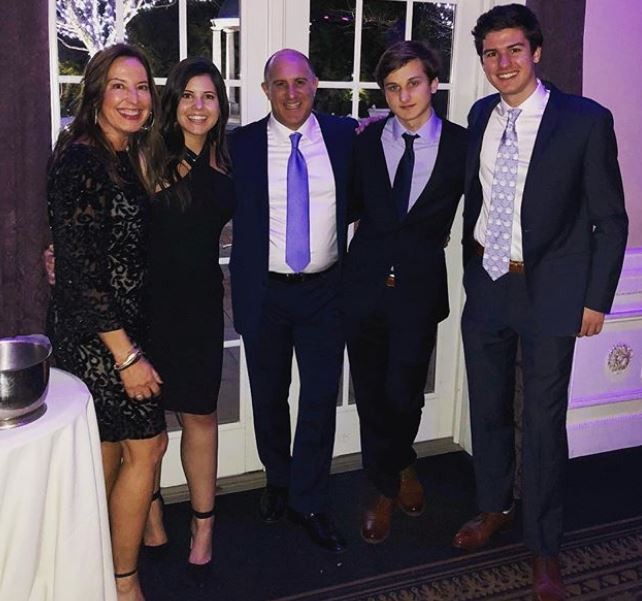 Debra Ponzek is a titan of the culinary industry. With over 35 years near the top of her industry, it is no stretch to imagine Debra has amassed a hefty personal wealth.

While reports vary on the extent of her wealth, Debra Ponzek is estimated to have a seven-figure net worth.

Currently, the primary source of her income is the Aux Délices restaurant chain that she co-owns with her husband. With three outlets across Connecticut and a dedicated full-catering arm, Aux Délices pulls in thousands of dollars daily.

Furthermore, the catering and event-planning wing, Aux Délices Events, is a burgeoning service capable of handling a small-sized venue to full-on weddings, balls, and formal gatherings.

In addition to that, Debra also has leftover wealth from her years-long stint as a chef in establishments like Tarragon Tree, Toto Steakhouse, and Montrachet.