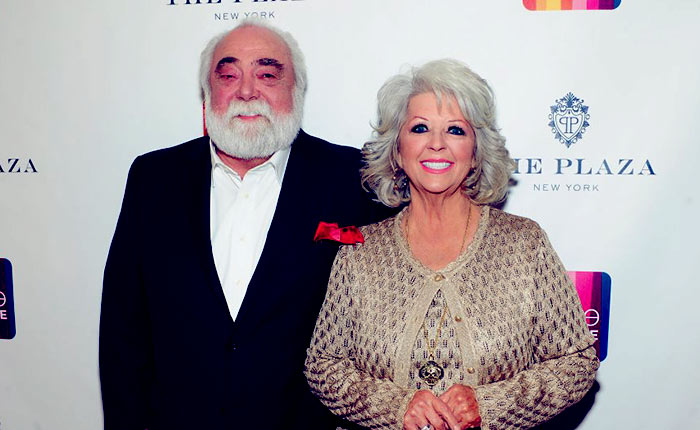 Paula Deen is an American restaurateur, cookbooks author, and a TV personality. She has been married twice, first to husband Jimmy Deen. Her current husband, Michael Groover, later succeeded husband, Jimmy. For how long was she married to her first husband, and what informed the decision to ditch the first marriage?  Read on to know more as we explore the lives of Michael and Jimmy Deen.

Paula Deen has been in the limelight for a while, and her husband, Michael Groover, is no exception. He is a thrill to his fans just as the wife. We give you fifteen facts about his life.

Michael Groover tied the knot with Paula in 2004. They have been together since then amid perpetual divorce rumors. 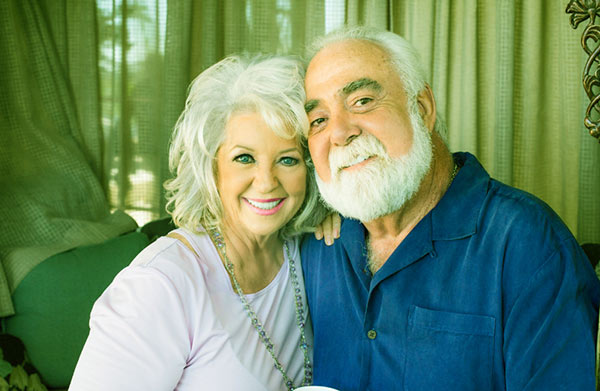 His wife, Paula Deen, is 73, having been born in 1947. If you were to compare the two love birds, Michael Groover appears to be the oldest, but the opposite is true.

In most Southern marriages, the norm is always to have the wife younger than the husband. However, in the case of Paula Deen and Michael Groover, their marriage defies this tradition, and they care not an inch.

Interestingly, the pair were neighbors before they got to know each other. Paula had dogs that kept going out. Once, they ventured into Michael’s yard. Paula went in search of them and guess who she meets? Michael. The following day, they were out on a ride date on Paula’s new boat, and the rest is history.

Shortly after their meet, a couple of years later, the two love birds decided to get married in 2004. The wedding ceremony took place at Bethesda Academy and was broadcasted on Food Network.

Paula enjoys reminding herself of the big day via the broadcast. Surprisingly, Paula went on to release the wedding menu on her website showing full of Southern delicacies.

Some of the delicacies that docked their food menu were fried collard greens, crab-stuffed shrimp, and pickled okra sandwiches.

Well, wouldn’t you be lucky to marry a renowned super chef? Michael is the lucky guy here. The reality was so overwhelming that he decided to pen it down in a book. The book – My Delicious Life with Paula Deen retails on amazon.com for $16.

In the book, Michael talks about before meeting Paula and after they met. The book must have been a bestseller to their fans and many others who can relate. Michael also doesn’t forget to talk about his tugboat career and the adventures in there.

Groover writes as the one speaking and romantically describes her lovebird. “Miss Paula Deen came into my life bringin’ blue eyes, beamin’ smiles, balance, and butter — no end of the butter.” In the book, Michael also talks about Sea-food themed recipes.

It’s charming how the couple seems to work together seamlessly. Because of Paula Deen’s culinary skills, Michael should just have sat and wait for the delicacies at the table.

But no, he is also a chef in his rights.  In 2011, Michael Groover featured on Paula’s Best Dishes show. The two prepared a whole meal of seafood spread together.

He cooked the seafood in recognition of his job as a tugboat captain.  Michael has also featured on Paula’s son Bobby show where she joined the son in preparing cameo.

Why anyone in the world would want the couple divorced isn’t clear. But the two have had to field several questions from journalists about divorce allegations.

A move by Paula Deen to solely grant Groover one of the deeds to her estate must have turn heads the wrong way.

Rumors sprang that the move by Paula Deen was a quiet divorce settlement amid allegations of Michael’s clandestine affair with a middle-aged brunette.

The couple seems to be a perfect match when it comes to controversy. From age difference to the use of the racial slur, Paula has been on the air for the wrong reasons.

But her husband, Michael Groover, is no exception. While at an interview in 2017, Paula was asked a question about NFL players kneeling during the national anthem.

Not ready to take in the question, she swerved the answer to her husband by saying she isn’t a sportsperson. Funny enough, she chirped of the fact that the husband is a little disgusted with the players kneeling.

In 2015, Paula secretly transferred a deed of their home in Savannah to Michael. Dubbed as a – deed of gift, the house had been their matrimonial home since getting married in 2004. 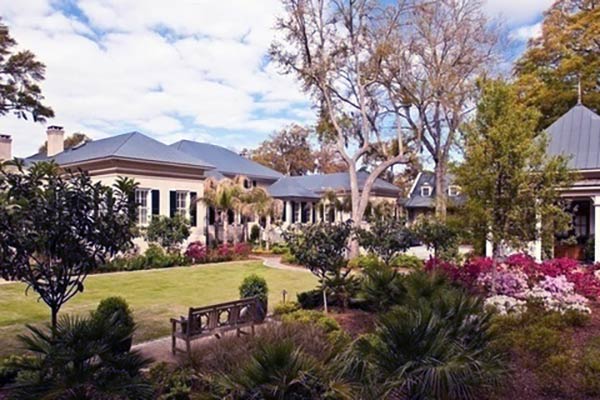 Irrespective of the rumors about their divorce flying right, left and center, Paula stated that she handed the gift over to Michael for consideration of their natural love and affection.

Out of the family initiative to eat healthily and cut weight, Michael Groover wound up losing 60 pounds. The family decided on weight loss after Paula was diagnosed with Type 2 Diabetes.

Paula inspired Michael to go the healthy path, and the sons joined the initiative too. They regulated their diet by cutting down on carbs, eating more vegetables, and slimming down.

And instead of jeopardizing her career by avoiding cooking with heavy butter, she moderated it. Paula Deen’s two sons Jamie and Bobby also lost weight.  45 and 33 pounds, respectively.

Who said a stepdad couldn’t have a great relationship with his stepsons? Well, this is true of Michael and Paula Deen’s sons.

They once took to Facebook to appreciate Michael for always making their mum so happy. Of course, it’s never easy to fit in a grown-up family, but the couple seems to be managing it extremely well.

Because of the sons’ post on a Facebook post, Michael received lots of love from fans totaling to 4900 together with 500 comments. People couldn’t have enough of one happy family.

You may mistakenly assume that Michael is a chef like his wife, but nothing could be further from the truth. While it’s hard to tell his career, Michael was once a tugboat captain in Savannah, Georgia. His career must haven informed their first date ride on a boat.

Aside from their relationship, there is an interesting story about Michael Groover choosing to take part in a lookalike contest.

On 21st July 2018, he traveled in the company of his sweetheart to Florida to take part in the context. To their surprise, she emerged the winner. He won the Hemingway look-alike contest, a world-famous context in Florida.

The persistent Michael had attempted the contest nine times before his winning. Groover bet the other 150 contestants to emerge the winner.

Paula Deen was all the happier that she went ahead to cut out his face on a piece of paper and hang it on a stick. Through writing, fishing, and hunting, Groover said he could relate to Hemmingway.

Given the success of Paula Deen in the restaurant business, you may think Groover is only there to enjoy the fruits of the restaurant empire. However, Michael Groover is not the man who would sit and watch things happen.

As it turns out, he once owned his line of coffee that sold different 8 different tastes of coffee. He unveiled his coffee business in 2007, giving it the name Captain Michael’s Coffee. Some of the brands he had are The Lady’s Double Chocolate cream, Savannah Seduction, First Mate’s Blend, Captain Choice, River Street Blues, and Paula’s Hazelnut Rum Cake.

Despite growing the beans for her coffee line in Valleh del Cauca, Colombia, Groover could process them via the Savannah Coffee Roasters. The business is no longer in place, but one day, he may opt to start it again. Who doesn’t love coffee anyway?

At one point, Paula Dee felt offended after her husband made comments to suggest that his mum made the best crisp in the world. Such words in the ears of a renowned chef only created bad feelings. While it was hard for Dee to accept, she confessed in an interview

on Good House Keeping in 2008, that Michael Groover doesn’t have a lie in him. After she had prepared the best pear crisp she could, Michael said he was unimpressed, and it wasn’t as good as her mama’s.

Before Paula Deen found true happiness in her second marriage, she had the first one that ended shambolically. Her first husband, Jimmy Deen, is the father of her two grown-up boys, Jamie and Bobbie.

Paula and Jimmy Deen were married for about 24 years. That was from the year 1965 to 1989. Some information is better kept in the closet. And this is what Paula Deen might have decided to do. However, we got wind of some information that may help you know more about Jimmy Deen.

Young and out of school, Paula and Jimmy Deen felt they were ripe for marriage. They were both teens at 18 years old. Their parents gave them the go-ahead to get married, and the rest is history.

Unfortunately for the two, the young marriage never had a good share of matrimonial bliss. It wasn’t long before Deen realized Jimmy had a drinking problem. Paula Deen’s effort to help her husband quit drinking did not help much.

Amid their marital problems, Paula lost her dad a year later at the age of 19. Four years later, Paula Deen lost her mother. At this point, the couple had two kids Jamie and Bobby. Paula Deen had only one way to deal with the problem. Carry her kids and part ways with Jimmy Deen in 1989. She was to remain a single mother for 15 years till she found the current love of her life Michael Groover.

Paula Deen’s Sons Are Famous in their Own Rights.

Thanks to the love and care of their mother, Jamie and Bobby are now two fully grown-up men. They followed the footsteps of their mother into the kitchen. They are not only chefs in their mother’s restaurant but also successful entrepreneurs who have been featured on the food network. 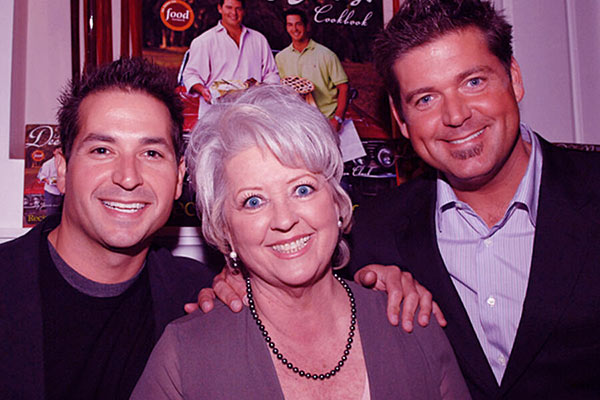 Caption: Paula Deen with her son Jamie and Bobby